On Monday, May 28th, an additional official day off, the special Kurazh Bazar will be held at the Art-Zavod Platforma in Kyiv. The program has been developed by the Elena Pinchuk Foundation jointly with the partners of the event. The guest of the event will be the legendary singer, Elton John. Sir Elton will meet with Ukrainians who are fighting AIDS and will talk to HIV-positive people.

Guests of the event will be able to visit a photo exhibition showing the history of 11 years of joint activities of the Elena Pinchuk Foundation and the Elton John AIDS Foundation. Once again, an international art project, created by one of the most famous contemporary artists Ai Weiwei at the request of Elton John, will be presented in Kyiv.

The price of the ticket will be 100 UAH. All funds raised from selling tickets this day will be directed to the implementation of the project of creating an informational and educational center for youth in Kyiv.

Long-term partner of the Foundation, All-Ukrainian Network of PLWH will present an interactive program, which will include educational lectures, quests, mazes, HIV testing, etc. Well-known Ukrainian media representatives and activists will lecture, in particular on tolerance and non-discrimination, sexual education and biology of sexuality. All visitors will be offered an online testing that determines the risk of a possible HIV infection. Also, a free rapid HIV testing station will work during the day.

From the interactive studio, Radio HIT FM will host special reports and will interview participants and guests of the event in real time with broadcasts throughout the Art-Zavod Platforma. The musical program of the broadcast will be entirely devoted to the work of Elton John.

Also Durex – one of the most famous brand in the world of condoms, will hold special interactive activities.

All updates of the program will be posted on the Facebook page of Kurazh Bazar.

This event will be the continuation of the comprehensive program and informational campaign of the prevention and fight against AIDS in Ukraine, which the Elena Pinchuk Foundation has been implementing for over 10 years in partnership with the Elton John AIDS Foundation and other organizations. In the evening of May 27, on the big screen of the Kurazh Bazar main stage we will show the legendary concert performed by Elton John on the Independence Square in Kyiv in June 2007 where he appealed to all Ukrainians with the call "Let’s stop AIDS together!". 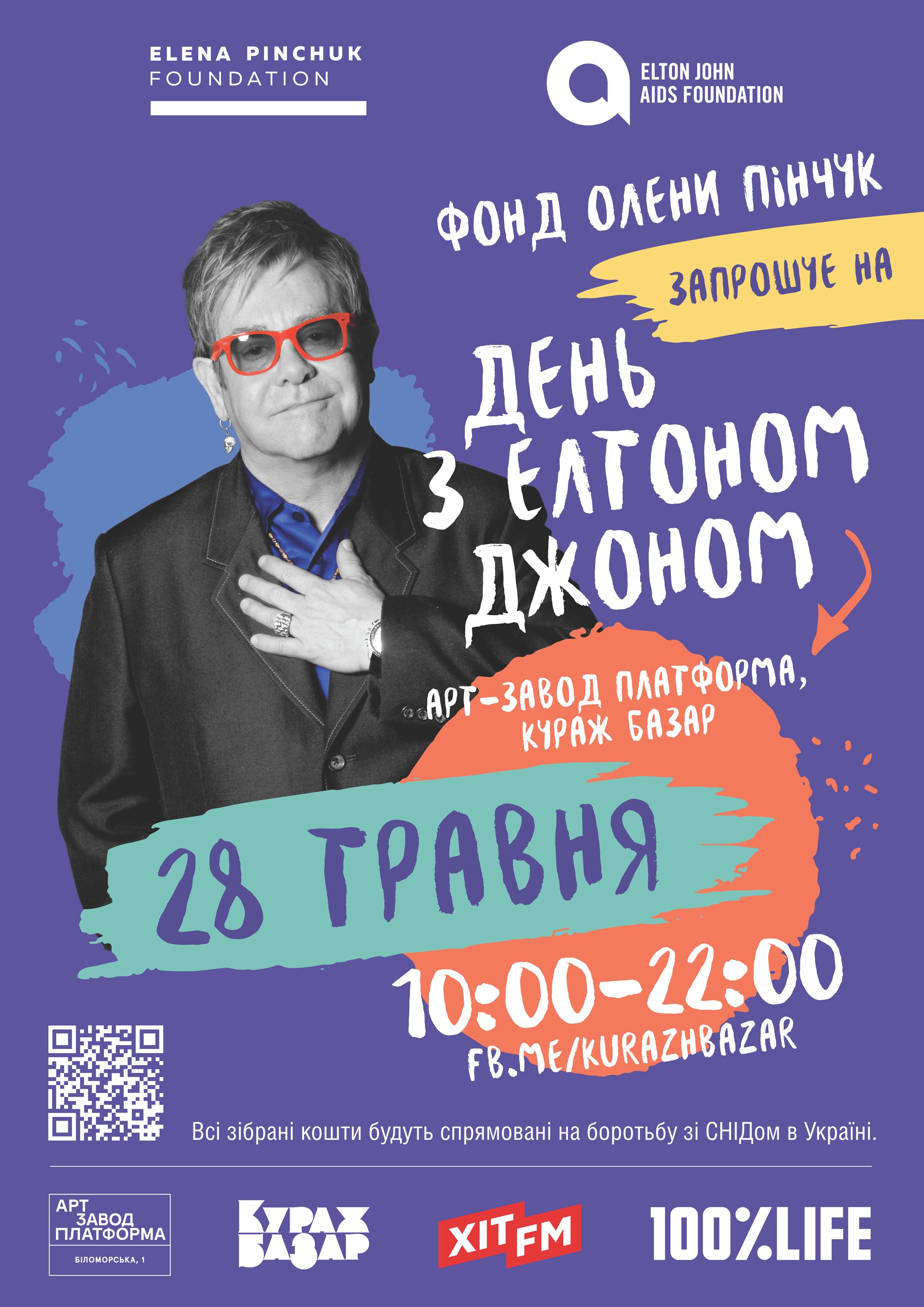 "A Day with Elton John" is an informational charity event organized by the Elena Pinchuk Foundation in partnership with the Art-Zavod Platforma, Kurazh Bazar, the All-Ukrainian Network of PLWH and the Radio HIT FM, which aims to prevent HIV/AIDS and engage Ukrainians in the fight against AIDS in Ukraine.

The Elton John AIDS Foundation (www.ejaf.com) is one of the world's leading non-governmental organizations that implements innovative HIV/AIDS prevention educational and support programs for HIV-positive people. The Foundation, founded in 1993, has implemented programs in 55 countries around the world. The Foundation supports its projects through special events, individual marketing projects, voluntary contributions of individuals, organizations and foundations.

The Elena Pinchuk Foundation (www.antiaids.org) was founded in September 2003. The focus areas of the work of the Foundation are the fight against AIDS and a healthy lifestyle; mentorial and educational projects aimed at young girls and women; attraction of the best international experience in the humanitarian field to Ukraine.

The All-Ukrainian Network of People Living with HIV (network.org.ua) is the largest patient organization in our country. The goal of this organization is to overcome the HIV/AIDS epidemic in Ukraine. The Network works with patients and for patients, representing the interests of people living with HIV in 25 regions of the country.

Art-Zavod Platforma (artzavodplatforma.com) is an intellectual campus, the biggest creative and cultural complex in Ukraine with a unique ecosystem, which combines business, art, education, festivals, coworkings and an inspirational atmosphere. Philosophy of the Art-Zavod Platforma is to promote the creative potential of people in all segments of the creative economy, by building an environment for the development of innovation and networking.

Kurazh Bazar (kurazhbazar.com.ua) is a charitable Kyiv flea market with the largest inclusive children area, entertainment for all, a lecture hall, dog hangout spot and a food court, that gathered all the favorite places. Kurazh Bazar takes place monthly at the Art-Zavod Platforma.

HІТ FM (hitfm.ua) is a №1 radio station in Ukraine. It has been a leader of the Ukrainian radio market for over 10 years and has one of the largest networks. It broadcasts in more than 100 cities. 4 million listeners are tuned in to HIT FM every week. The top hits of Western and Ukrainian pop singers are broadcasted every day.